I suppose it’s time I got thinking about what to grow in the garden this year. It may only be the middle of January but with the way time flies when I’m having fun seed starting time will be here before I know it.

Last month I did an inventory of the seeds I have on hand with notes on quantity and age. Armed with a list of crops I’ve run out of and want to grow again as well as a wish list of new things I’d like to try I’ve been perusing the pile of seed catalogs. Some varieties are common to several sources and some are available at only one place. Clearly I’ll have to place more than one order, but I’ll check the local garden centers first, of course. I’m also anxiously anticipating the arrival of the Seed Savers Exchange Yearbook that should be mailed toward the end of this month. I joined SSE last year for several reasons including access to that catalog of nearly fourteen thousand varieties. My hope is that some of the more unusual vegetables I’ve been reading about in nineteenth century garden books might be available there. And in addition to those sources, my seed guru will be offering up some goodies.

The part of the planning I don’t relish is trying to figure out how to rotate crops. In order to avoid depleting specific soil nutrients and to confuse overwintering pests one should avoid planting things from the same family in the same spot for several years. I like to think of myself as organized but when I look around online and in books at the way some people garden I wonder if they’re putting me on. I see a lot of plans where each bed has been assigned a neat succession of plantings to take it through the season. There’s even a nifty program that will help you in planning rotations. I couldn’t use it because I just don’t garden that way. 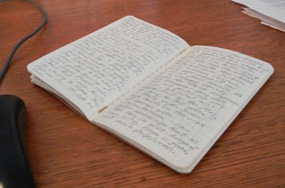 To the extent that I do plan, I try to avoid egregious mistakes like planting all the tomatoes in the same place two years in a row. This year, for example, in the half of the garden we’d newly acquired I planted the tomatoes where I was fairly sure the previous gardener didn’t plant hers. Good so far. But I had too  many plants for that area so three additional plants found homes in three different rows of beans. I managed to get my Brassicas in a bed that had been mostly Brassica-free in 2010, but when some plants croaked early on I decided to fill that spot with another pepper. See the picture? Instead of neatly grouping plants like in the idealized plans, I’ve got random, single plants tucked in here and there wherever the opportunity arises. I can look back on previous years’ plans—which are actually records of what went on, not what was anticipated—and try to place things in the best spots. But it becomes something of a puzzle.

Maybe I just won’t worry about it too much. I’ll use my records to keep from putting entire blocks of plants where their relatives have grown for at least a couple years. But there’s inevitably going to be some overlap. If nothing else, I can use that as an excuse if something doesn’t grow as well as it should.