It seems like ages ago that the first of my Indigo Rose tomatoes started showing some color. In time they all grew larger and developed the dark purple color on their stem ends. And then they just sat there for weeks being otherwise green and hard. Finally, a few of them started to redden and today I decided it was time to taste. 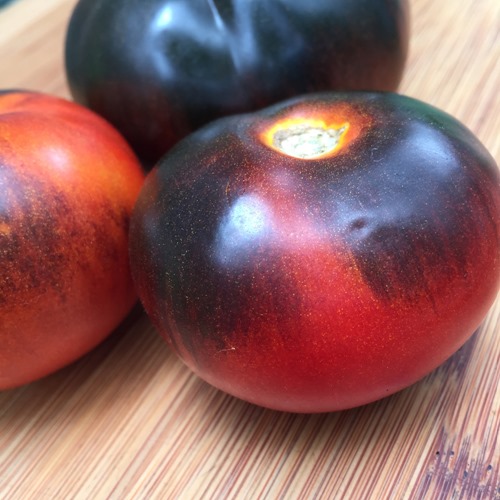 The purple pretty much stayed the same on the ripe tomato. It ripened to a typical red tomato color. 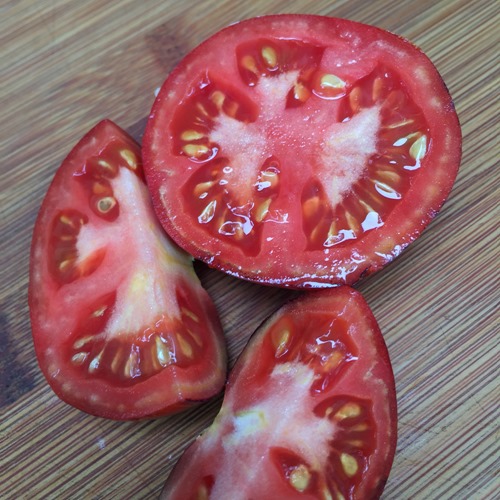 Inside it was red throughout. I’ve gotten used to the “black” tomatoes I grow having at least some darker flesh mixed in but there seems to be only a little bit just inside the dark areas of skin on this one. The taste was OK. Nothing spectacular. It as a fun novelty to grow but I don’t see it being a major source of of anthocyanins in my diet, but at least a little more color in salads.

The second subject of today’s taste testing was the Habanada pepper. This variety of what would normally be a rather hot pepper, the Habanero, has been bred to have no heat and given a clever name. I don’t mind hot peppers, but I was intrigued so I ordered a couple of plants. 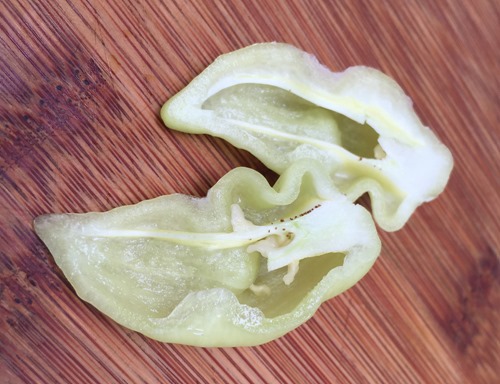 Inside it didn’t have many seeds. As I brought it up to take a bite I could detect that distinctive tropical hot pepper fragrance. Biting down and chewing I waited but the burn never came. It was strange. I liked it, sweet but not like a bell pepper. It’s going to take a few of them to add much flavor to whatever I may put them in, but fortunately it looks like the plants are going to be heavy bearers despite their diminutive size.

Have you tasted any new-to-you produce this year? 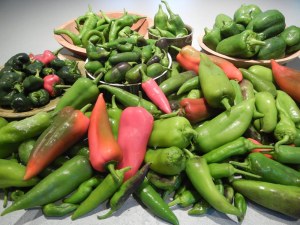 I’m going to spare you all the highly, excessively alliterative content I considered including in this post. Suffice it to say I’m dealing with a plethora of peppers as I participate in my first Post Produce. A couple days ago I finally called the pepper harvest over and harvested every last one of them. We may have some sunny days but it’s going to stay cold and the chances of many more of them growing appreciably or even ripening are pretty slim. I selected a good quantity for freezing and then, faced with this abundance I decided it was time to try pickling some.

The first recipe I used was the basic one for hot peppers in the Ball Blue Book Guide to Preserving. It’s a simple solution of vinegar and water flavored with garlic. I mixed it up by using different peppers, treatments and additional vegetables. Some recipes I had looked at called for blistering and peeling the peppers first so I did that with the largest of the remaining Chervena Chushkas. These are so good this way I may have to pressure can some next year so I have them for making muhummara. For now the commercial bottled ones will have to do.

In the end I had eight pints. Three are straight, whole jalapenos, two are the roasted sweet peppers with some carrots added to one jar, two are green Italian frying peppers with celery in one and onion in the other and the last jar is plain Ancho Gigantea–none of which were actually gigantic.

With these done and out of the way I’m still left with quite a few more green Chervena Chushka peppers. For these I’ll use Ball’s “Pickled Pepper Mix” recipe. This version calls for slitting and brining the peppers for twelve to eighteen hours so I’m timing that process so that I can do the actual pickling tomorrow morning.

This year the only pepper seeds I started for planting in the garden were for an heirloom variety called Chervena Chushka. The plants turned out to be prolific producers and I was able to harvest a good number for roasting.

In the past my attempts at roasting peppers haven’t been entirely successful. The idea is to char the skin so that it rubs off cleanly and easily and in the process the flesh of the pepper is rendered soft, sweet and delicious. The method I previously used consisted of taking the grid off one of the gas burners and laying/holding the pepper directly in the flame. When I tried that this time, I got the same results I always have. The skin blistered, blackened and peeled readily on the bulges of the pepper but stayed fresh and undercooked in the valleys, so to speak. I got frustrated with this process and decided to try the broiler method. I arranged the peppers on a baking sheet and positioned them as close to the broiler element as the oven rack allowed and watched closely as the wider parts began to blister and char while the tips remained red and fresh this time. This wasn’t any better than the flame. Deciding that at least on the stovetop I could tediously direct the flame at the spots that obviously still needed it, I pulled the peppers from the oven. That’s when the discovery happened. Now that the peppers had been pre-roasted or at least had the chill taken off them, they blistered and charred quickly and evenly in the gas flame.

After each pepper was completely roasted I placed it in a pan covered with foil to allow them to steam a little longer and loosen the skin.

After they’d all been roasted and rested, the skins slipped off ridiculously easily revealing the sweet, fragrant flesh.

In the end we stuffed them with polenta and goat cheese and served them with some nice roasted halibut and Tasty Evergreen and Sungold tomatoes also from the garden.

#lobaria #lichen #nature #newhampshire
Peach cobbler #baking #bakinginnewhampshire #eatlocal
While some naturalists sneer at the practice, I keep a life list of birds (and other things) I've seen. In going over my notes from our recent time in Peru I discovered this beauty is the 1,000th bird species I've observed. The Horned Screamer (Anhima cornuta) is a BIG chickeny/game-birdy looking thing that's related to waterfowl. We got to watch a pair with their two babies while rafting in the Cocho Machuwasi swamp. It's an amazing bird that held a special place in my heart even before I knew of it's special position on that list. #birds #peru #wildife #nature #getoutside
This pine sawyer beetle seemed to be obsessed with the shelter canopy. What a pretty little beast. #beetles #coleoptera #entomology #cerambycidae #camping #nature #encounters #wisconsin