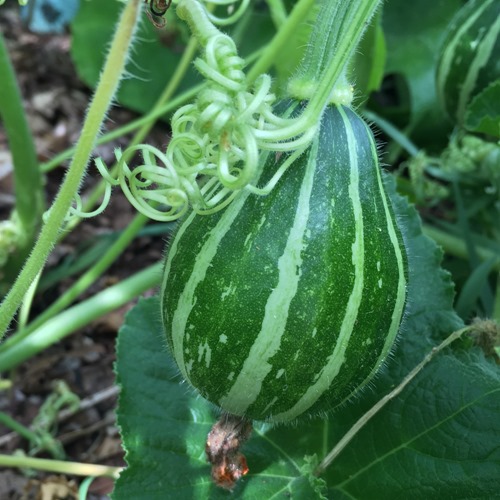 The volunteer squash I discovered is starting to show some evidence of its parentage. There are a few little fruits forming along the vine and I’ve been browsing images of striped squash to see if I can get a clue as to who its parents may have been. So far I’m finding plenty of varieties with wide light stripes alternated with narrow green stripes but none with the reverse like this except zucchini, which might not be a good thing. I’ve just started my investigation. Perhaps when it’s fully-grown and ripened and tasted I’ll have more hints as to where it came from. In the meantime I’m coming across all sorts of squashes I want to try!

There’s a mystery squash in the garden and  can’t quite bring myself to pull it out. 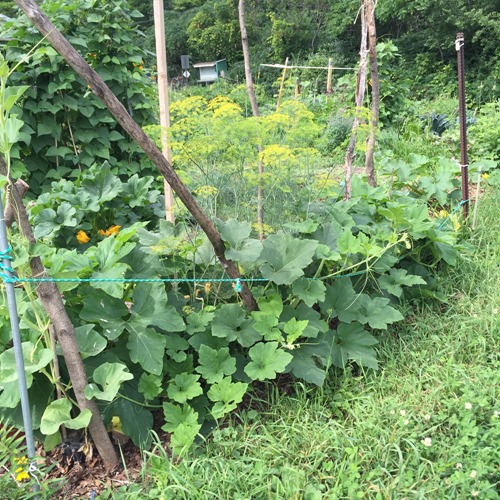 I crammed four bush squash and three (originally four) gourds into one of the twelve garden beds following the early spring planting of spinach. As they were growing I noticed there was an extra cucurbit among them. Curiosity prevented me from tearing it out right away. It’s turned out to be a vining type so I’m training it up my extremely rustic trellis and steering it away from the paths and other plants. Most likely it’s from a seed that came in with the compost. Squash cross pollinate easily so this one could have an interesting combination of traits. As long as I can keep it under control we may find out what those traits are.