My Cypripedium parviflorum var. pubescens, a beautiful golden yellow lady slipper orchid bloomed today. I say “my,” but in reality I feel I’ve only been given charge of its care for a while and that eventually it will pass on to someone else–a family member, I hope–who can keep it long enough to pass on yet again. And I also hope they have better luck with it. As its current steward I think I’m letting it down. 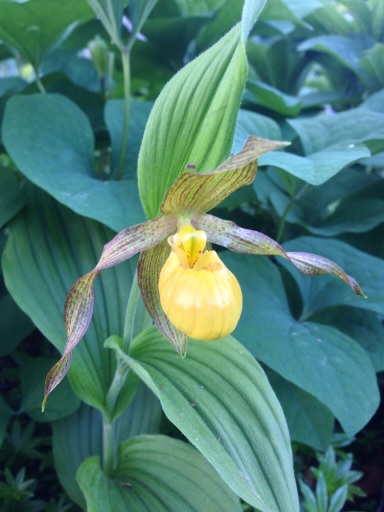 This particular plant came to my garden by way of my maternal grandmother. It grew at the side of her cozy bungalow where the family gathered for major holidays for decades. The house was painted the same shade of yellow, come to think of it. As best as we can piece together the history, she would have planted it there about the time they moved off the farm and into town in the early 1950s. That would make this plant sixty years old.

When Grandma sold her house and moved my mother dug up the orchid and divided it into five clumps she transplanted to her own garden. When I became interested in growing orchids she gave one of the divisions to me. The plant thrived in my garden for years and increased in size. At its prime it held over thirty blooming growths. 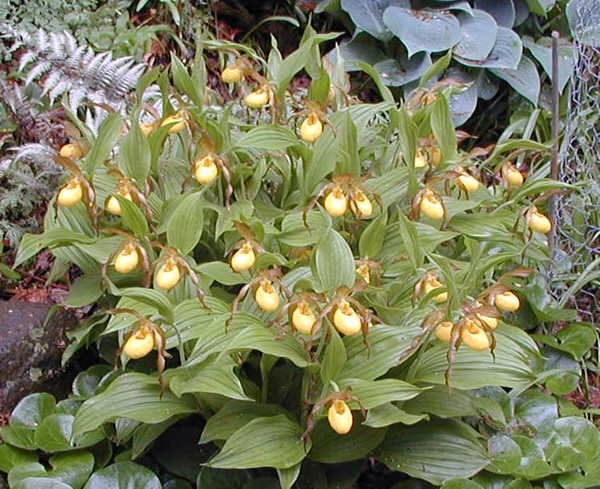 Then, seven years ago it was struck with a fungal infection. Desperate to save it I dug it up, divided it and cleaned it off. I moved the divisions to different areas of the garden to avoid reinfection and to give it a variety of microclimates with the thought that at least one would suit it well and it would recover. Today only two divisions still live, one is the single growth that’s blooming and the other has two stems that haven’t bloomed yet.

In its happier times Grandma’s lady slipper was strong and healthy enough to produce viable seed capsules. I sent the seed to a lab where they were grown and propagated into new plants that, to the best of my knowledge, are out there growing somewhere in other people’s gardens. One of the greatest causes of suffering is attachment. While I like to think the little plants I have will stay in the family somehow, I’m becoming more at peace with the notion that they might not. And if they don’t, at least there’s a chance that this heirloom’s genetic legacy is living on and bringing happiness to another gardener.

This post was prompted by You Grow Girl for the Grow Write Guild on the theme of “Loss, Attachment & Letting Go.”

I trust that under the snow and ice roots are poised to release green things up into the light.